With 3 callouts on  Saturday 4 September and several others over the last week, the year continues to be a busy one for the team.
On 29 August we were called out to help a female with a suspected broken ankle at the Storr. The casualty was taken to the Western Isles hospital by the Stornoway CG helicopter.
On Monday, 30th August three team members took a trip over the track to Camusunary to check the bothy for a solo walker who had not contacted his partner as planned. He was found safe and well.
We returned to the Storr on the 31st August to help our Scottish Ambulance Service (SAS) colleagues who were treating another casualty with a suspected broken ankle.
On Saturday 4 September, whilst stretchering to the roadside another casualty who’d possibly broken her ankle on the path between Sligachan and the Fairy Pools, Police Scotland informed us that the Scot Amb Service needed help to evacuate a casualty from the Fairy Glen, near Uig. We had to turn that job down, with local HM Coastguard crews stepping in.
Shortly afterwards the phone rang again and we were asked to deal with a cragfast (stuck) walker on nearby Bruach na Frithe. Three of our team left our stretcher party and quickly located the walker. She was then brought on to safer ground and accompanied to Sligachan by a team member.
We also found time on Sunday 29th August for some ropework training on the Cuillin ridge….. 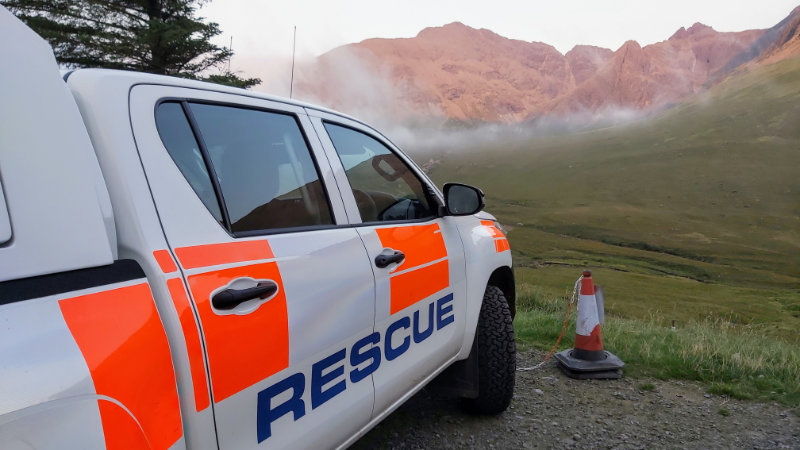 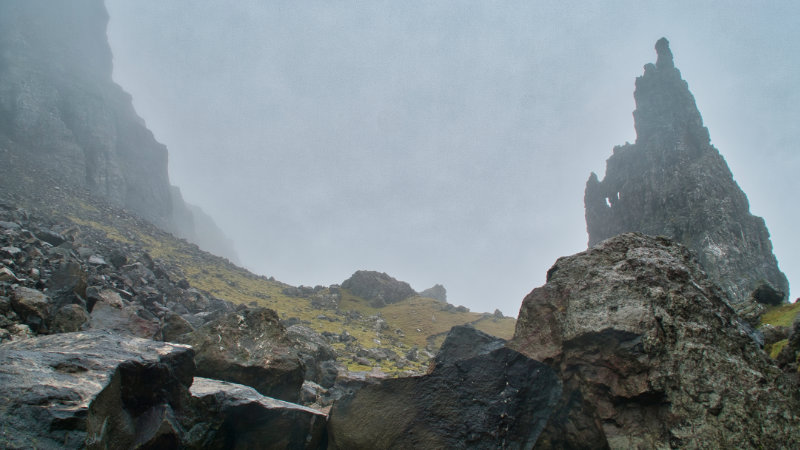 Two callouts in recent days. On Tuesday we responded to reports of a female with an ankle injury on the Bruach na Frithe traverse path above the Fairy Pools. Eight MRT attended and stretchered the casualty to the roadside

Today we assisted the@Scotambservice and Stornoway CG helicopter crew dealing with a casualty who’d fallen into the water at the Fairy Pools. The casualty was winched aboard the helicopter and taken to Raigmore Hospital. 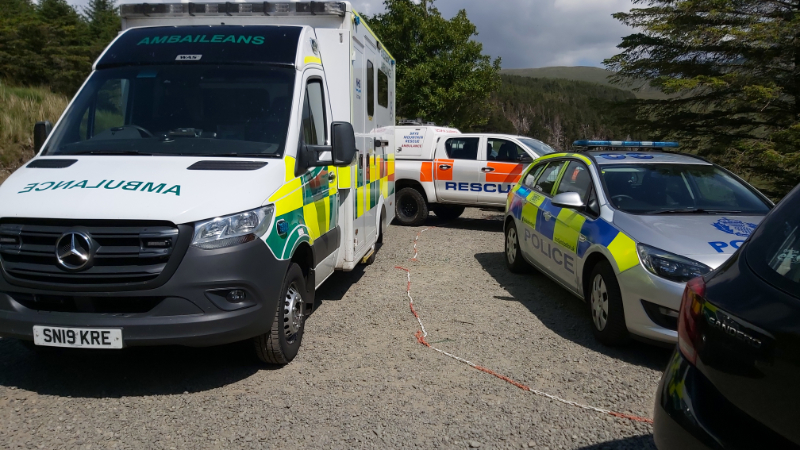 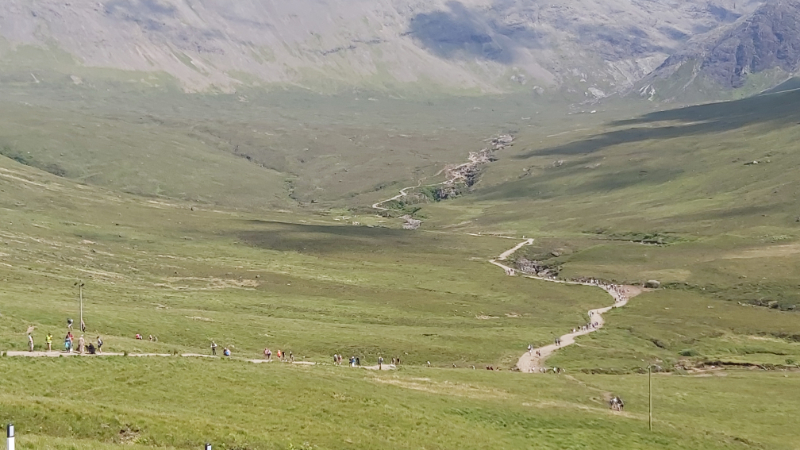 A busy time for the team over the last few weeks including several call outs over the last 4 days.
Last Friday a trials rider was airlifted to Raigmore from the Trotternish Ridge after falling and fracturing their lower leg.
12 Skye MRT were in attendance as were the Stornoway Coastguard helicopter crew .
We wish the casualty a speedy recovery and hope they regain their sea legs soon.
On Saturday we were called out to help a runner who had fallen close to the ‘Tourist route’ of Sgurr nan Gillean after the rock they were standing on gave way.
Despite a badly fractured wrist and head injury, they were able to make their own way down to Allt Dearg Beag at which point 5 team members were on hand to offer some pain relief and assistance with the walk out to Sligachan.
Yesterday morning, a party of two were escorted off Trotternish ridge after finding themselves unable to navigate down in worsening weather conditions.
Nine skye MRT personnel helped them to safety in high winds and driving rain. 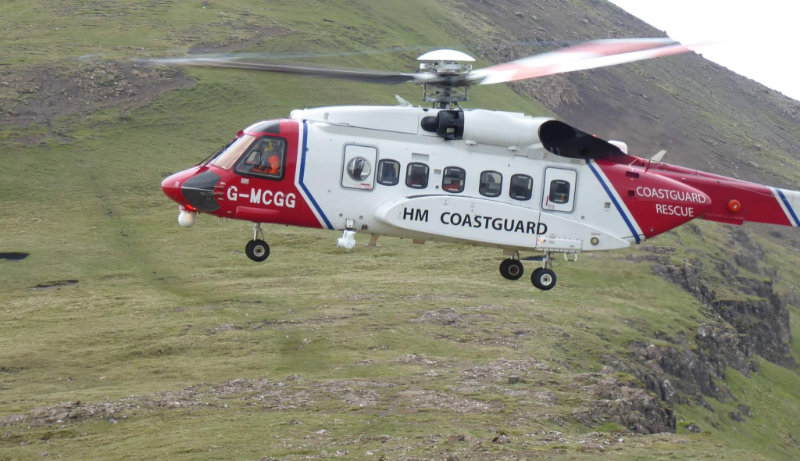 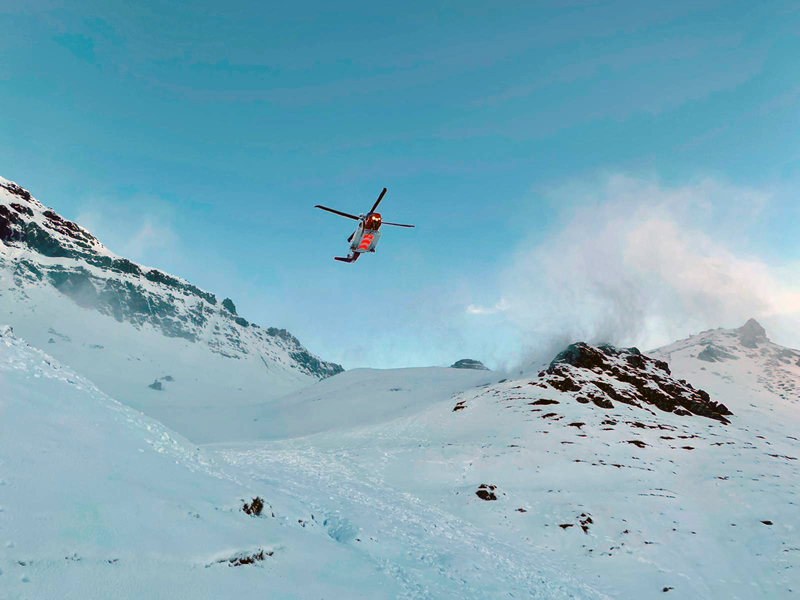 SkyeMRT were called at 13:30 on Sunday 31 January after reports that a local man had seriously injured himself whilst sledging close to the Old Man of Storr. 12 MRT attended as well as the Coastguard helicopter from Stornoway. The team were able to administer pain relief and fully immobilise the casualty before the helicopter arrived and airlifted him to The Queen Elizabeth Hospital in Glasgow. We wish the casualty a full and speedy recovery. 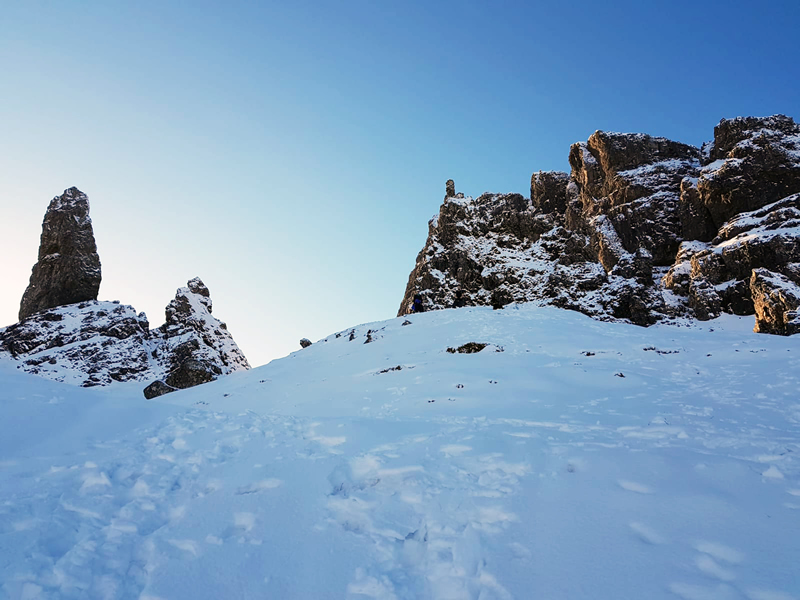 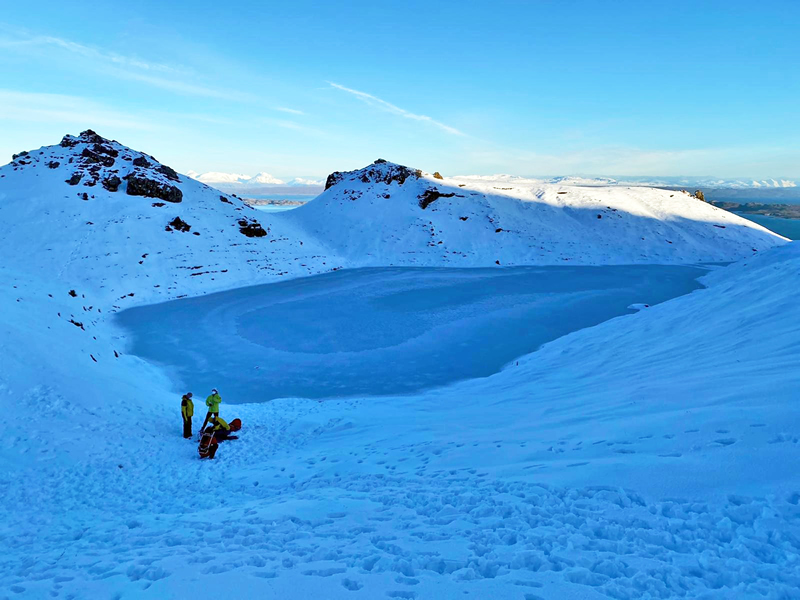 SkyeMRT were called at 13:30 on Sunday 31 January after reports that a local man had seriously injured himself whilst sledging close to the Old Man of Storr. 12 MRT attended as well as the Coastguard helicopter from Stornoway. The team were able to administer pain relief and fully immobilise the casualty before the helicopter arrived and airlifted him to The Queen Elizabeth Hospital in Glasgow. We wish the casualty a full and speedy recovery.

The Halloween cobwebs were well and truly blown off this afternoon when 15 members of@SkyeMRT rescued a casualty with a leg injury at the #OldManofStorr. Conditions were dreadful with 60mph winds and driving rain but the rescue was completed quickly and the casualty evacuated to the care of@Scotambservice 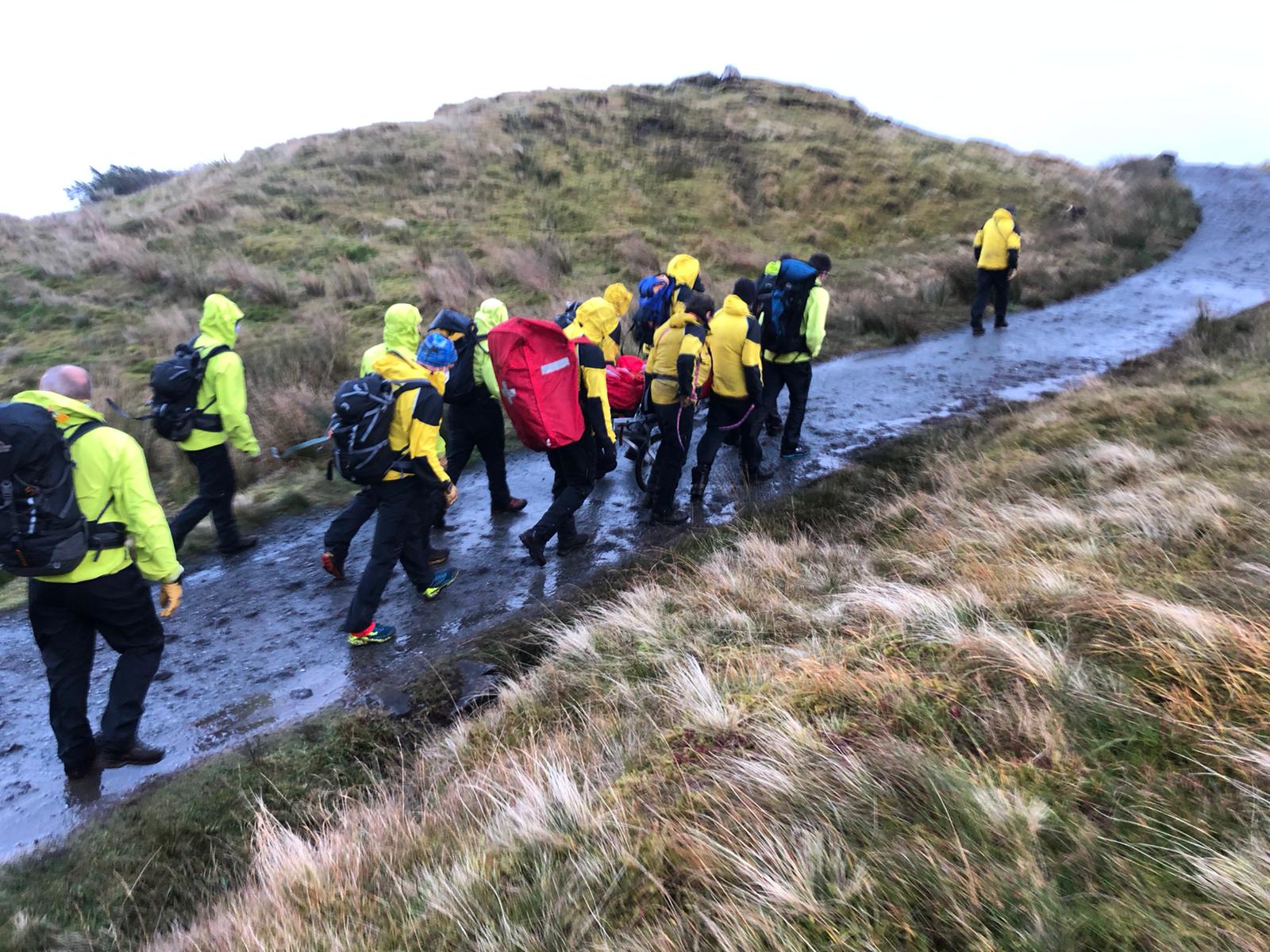 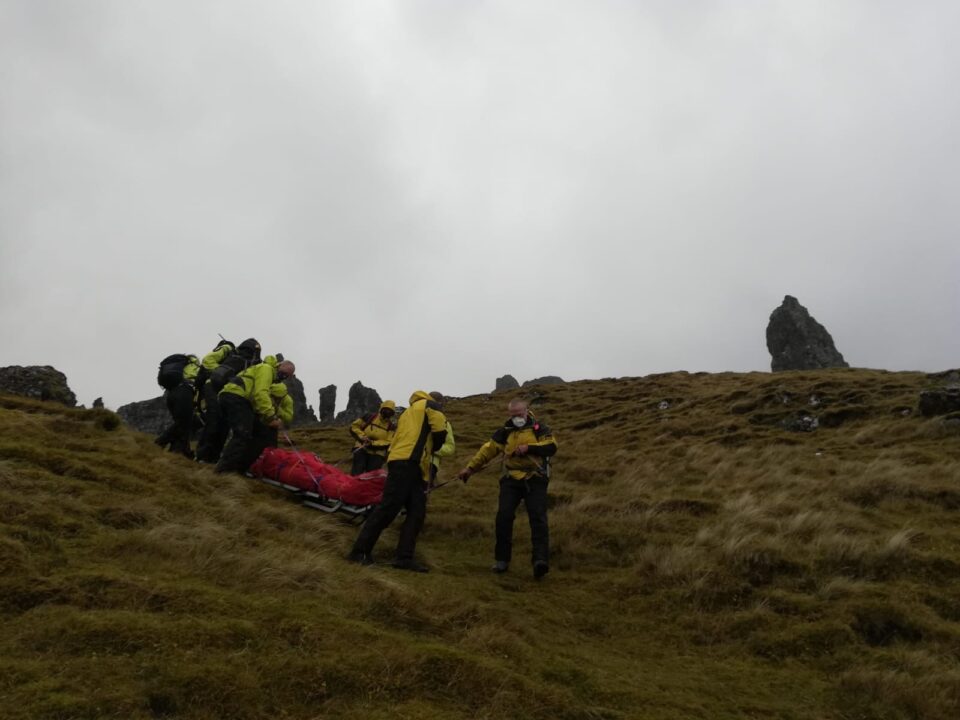 2 Incidents: Sgurr Alasdair and The Storr

Two quite differing call-outs yesterday, just to keep us on our toes.  Mid-morning a male went off route on Sgurr Alasdair and became crag-fast.  Luckily, he’d enough phone signal to raise the alarm.  A long and difficult search ensued in what were misty, murky, greasy conditions.
The casualty could be heard at a fairly early stage, but getting to him was another matter entirely.  Thankfully, with light fading, the clag lifted and the Coastguard helicopter from Stornoway was able to ‘pick-off’ the casualty from his rather precarious position in what was a fantastic piece of flying.  Back at base the casualty commented, “Thanks to everyone who helped me stay alive today.”  12 MRT were involved in this search and rescue, with more team members back at base as back-up.  Team members were uplifted by helicopter to Coire Lagan, saving us time and energy before we started our search. 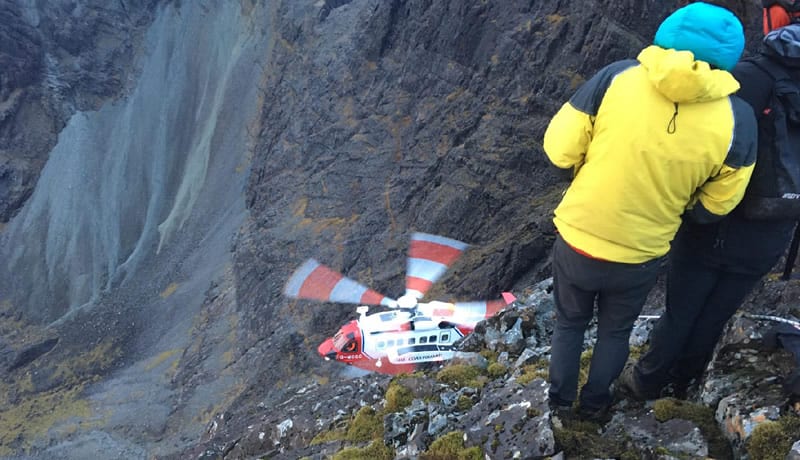 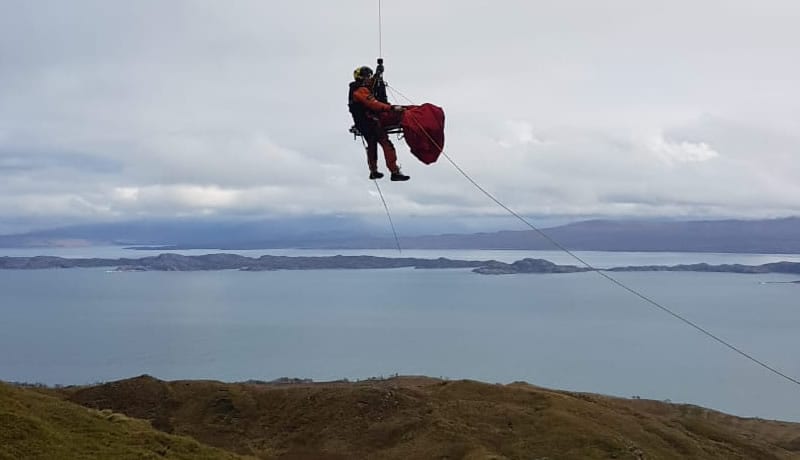 At the same time a female with a broken ankle at the Storr was given first aid, ‘packaged’ by our Team and winched aboard the Coastguard helicopter from Stornoway.  She was flown to Broadford hospital for treatment.  Six MRT were involved in this call-out.
Once again, many thanks to both helicopter crews from Stornoway.  Your professionalism is always reassuring and your help is always much appreciated.
Stay safe, everyone.

About 3.45pm on Tuesday 23 September, Skye Mountain Rescue Team were called to locate and assist a person who was stuck between swollen rivers on the path between Camusunary and Sligachan. One MRT group made their way to Kilmarie by vehicle and then onwards to Camusunary along the coastal track, and another group walked south from Sligachan. About 6.20pm the person was located near Caumusunary having received assistance from other walkers. They were all conveyed to Sligachan by Skye MRT.

Around 4.50pm Police Scotland received a call from 2 casualties who were in need of assistance at ‘The Bad Step’ – Loch Coruisk, on the Isle of Skye.

The Mallaig Coastguard Rescue Team were transported by Mallaig RNLI lifeboat to the RV point, and on scene, the Y-boat was launched to recover the casualties. Skye MRT who were already at Kilmarie accompanied the Skye Coastguard Teams to Camusunary to standby in case further assistance was required.

The casualties received treatment for their minor injuries and were then transferred to their forward destination by the Portree Coastguard Rescue Team.

Two people cragfast at the Quiraing

About 1510 hrs on Sunday 20 September, Skye MRT responded to two people who were reported as being cragfast near the Needle at the Quiraing, Trotternish.  The people were rescued by the MRT personnel.

On the afternoon of Sunday 13 September 2020, 8 members of Skye Mountain Rescue Team were engaged on a search at the Quiraing for a walker who was lost in the mist. Weather conditions were taxing with extremely heavy rain and strong winds.

The walker was located at Sgurr Mòr and assisted off the hill.